A site dedicated to this marvelous new automobile

Driving impressions and review of the new Honda Accord Hybrid Touring

For the last 10 years I’ve been driving a 2001 Accord EX-L. I’ve taken test drives in a few different cars in the past few months. Have drive the 2013 EX-L and 2014 LX once each. And I’ve driven the Hybrid Touring three times. They’ve all been short test drives with the sales-drone except for the LX drive.

What I recall most about the Hybrid is that it feels heavy and solid in a good way. The acceleration is there in an instant when you want it. That was nice. I didn’t really push that part of the test as I was trying (poorly) to hypermile it. Wanted to see how much MPG I could get.

It was fun trying to see how much regen I could get by coasting and using B mode too. The EV button is cool. It’s right under the gearshift. If you’ve got enough charge, don’t punch it and stay under 45 MPH it can stay in EV mode. But any slight deviation and it will cancel EV mode. 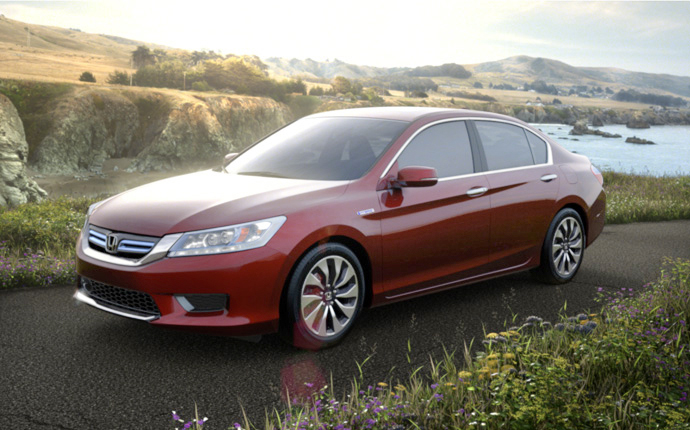 On my second test drive I was a bit bothered by the disconnect between engine RPMs and acceleration. Your foot is not connected to the engine throttle. The car does respond to your foot and it responds nicely, but the sound of the engine is not in sync.

Now, you don’t feel the engine start up. There’s no bump when it engages. It’s all smooth and you probably won’t notice the sound of the engine if you’ve got the radio on or doing something besides trying to absorb the cars nuances on a test drive. Other reviews I’ve read pointed out that with other hybrids the engine kicking in is very noticeable. Not with this car.

Then I got in the LX. It had a sportier, lighter, simpler, more connected feel. I liked its gauges better. Again, simple, to the point. Nice to have a tachometer again. In the Hybrid I found myself reading the MPG rating digitally in the center of the speedometer and sometimes confusing it with my MPH. For some reason my brain didn’t always pick up the needle of the speedometer. Also, the blue and green meters on the left weren’t that helpful in my short drives. Maybe it’s all a matter of relearning.

The cabin of the Hybrid Touring has a really luxurious feel to it. The EX-L, Hybrid EX-L and above probably all feel the same in that regard to me. I like the leather, the moonroof, the leather-wrapped steering wheel, etc. They’re all really nice cars to sit in. The push button start with smart key is awesome. If that didn’t exist or if it was available on the LX I might be really tempted to get an LX and add leather from a local shop for $1,500.

I have two gripes about the Hybrid. One – I can’t buy one yet! I want an EX-L in Obsidian Blue. Don’t know anyone that has one in an EX-L. And if they did I’d probably have to pay a sucker’s price at MSRP. Two – the trunk.

As you know, the trunk is smaller for the batteries. On the ICE Accords the trunk is huge and the folding rear seat is much improved over my 2001. There’s a lot of cargo area on the standard Accords. The Hybrid has a decent amount of trunk space. One weird thing is the upper shelf in the back can only hold 15 lbs. There’s a little sticker in the trunk warning you of this.