A site dedicated to this marvelous new automobile

I did it!  I finally bought my Accord Hybrid! 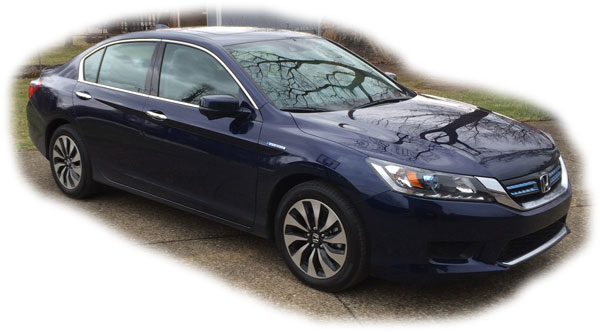 Seems like it took years, but in reality it was about two months.  This is a pretty hot car in high demand.  Well at least according to the dealers who have one.  Right now cars.com is showing 363 Honda Accord Hybrids for sale anywhere in the country.  Compare that to 66,503 regular Honda Accords.  I’d like to thank cars.com for not banning me from their site!

Cars.com didn’t have the Accord Hybrid as a searchable option until about November 5th, five days after it’s release.  But as soon as they did I probably crashed their server.  I watched that site and searched it day after day.  My car – an EX-L model in Obsidian Blue Pearl rarely made an appearance.  In December I only saw about four of them show up.  Most of them too far away.  When they were within reach (or shipping distance) the sellers were so proud that they had one the price was easy to figure out – MSRP.  No discounts.  No thanks.

There were a handful of dealers out there that I found that weren’t trying to gouge me on the price.  On January 1st I found another one – Corwin Honda in Jefferson City, MO.  Two listings for blue EX-Ls showed up on January 1 on cars.com.  I responded to both of them through the site.

The next morning I had a call from Corwin’s Emily Olsen.  We quickly negotiated a price and I decided to buy the car from them.  It was a crazy decision, mainly because they’re about 400 miles away.  But, a sound decision, because I could finally get the car I want.  Not a big deal to rent a car and take a road trip.  Her price was nearly identical to the other dealers who were pricing their cars fairly and not out to screw their customers over.

I can’t say enough good things about Emily and Corwin Honda.  Emily went the extra mile.  She even pulled my car into the service bay so it would be out of the elements overnight so it would be clean when I picked it up the next morning.  All the paperwork was ready in advance.  I spent about 20 minutes inside the dealership – 10 signing the papers and a few more with Emily going over all the settings for my new car.

Driving impressions:  smooth and quiet.  Those two words sum it up perfectly.  I love sitting at an intersection and the car’s in EV mode.  There’s no rumble.  You’re not holding the brake pedal, fighting the car from moving forward.  It just sits QUIETLY and waits.  Not a sound or vibration.  Acceleration is smooth and sleek too.

The disconnect (where engine RPM at low speed is not related to the gas pedal) that I was worried about really doesn’t bother me.  It is more connected than I remember from an earlier test drive.  The car is really quiet anyway.  If the gas engine is running it’s still much quieter than my 2001 Accord.  If you’re listening to some tunes you don’t hear it at all.

When I locked my car the first time I thought I’d left the key fob inside.  I closed the door and got three beeps.  Nope, both key fobs were in my pocket.  Another salesman on the lot was helping me transfer things from my rental car.  I pointed out the beeps.  He was puzzled too.  Guess what… the car was still on!  It can be on and ready to drive, but you’ll forget about it.  I’ve done it several times.

Since I got her home yesterday she’s only been out once before the rain hit.  Today we’re at 0 degrees and I’m not going anywhere new car or not!

Stay tuned!  Or post your questions in the comments section below.